Manolis Apartments are located in Plakias, a lovely village in the south coast of Crete, famous for its beautiful beaches and the amazing countriside area.

Initially a fishing jetty and a few houses, Plakias developed in the last few decades into a tourist resort. The first official notice of Plakias was in 1961, when it was mentioned in a census as the permanent home of six fishermen. The history of surrounding mountain villages like Myrthios and Sellia goes back into the 10th century, when the Byzantine Emperor Nikephoros II Phokas (961 AD) built roads and bridges in order to link those villages.

Plakias has a 1300 metre long sandy beach and several other beaches within walking distance (Souda, Damnoni, Ammoudi and Skhinaria). To the east exists the famous Monastery of Preveli, and the amazing Preveli Palm beach.

There are two roads into Plakias through the mountain range which lies to its north, both of which run through gorges – to the north of Plakias, the Kotsifos Gorge, and to the northeast, the Kourtaliotiko Gorge.

The area is quite developed and provides many facilities to the visitors such as organized beaches, super markets, all kind of shops, lovely taverns and restaurants and of course an interesting nightlife. 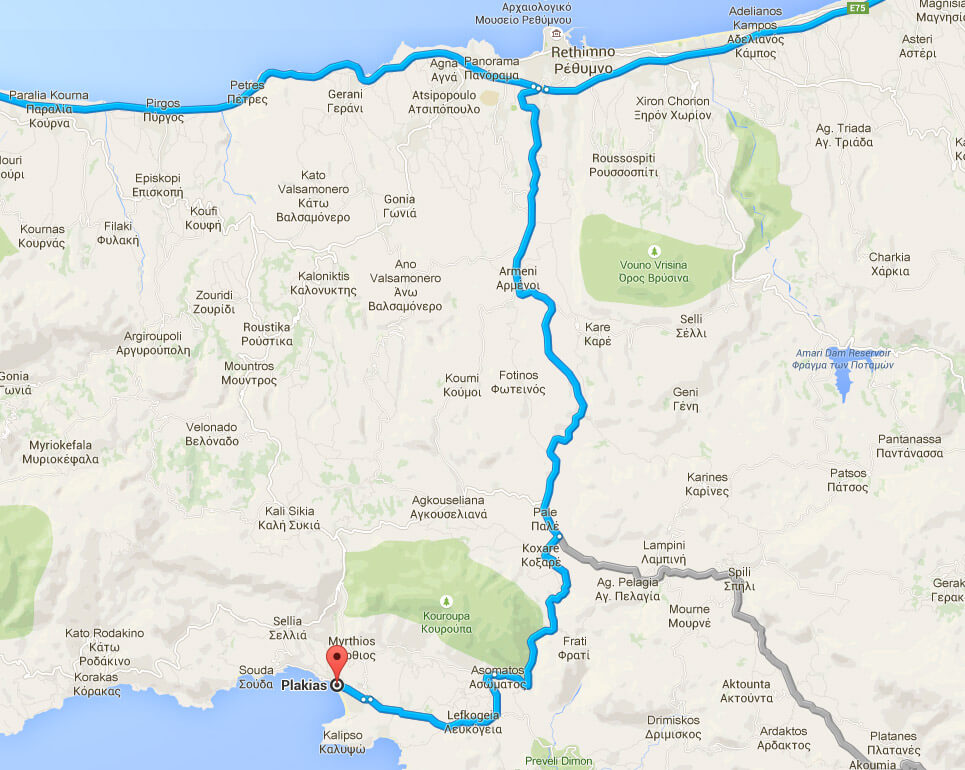 Coming from Chania airport/port to Manolis Apartments in Plakias, you will take the national road with direction to RETHYMNO for about 65 kilometers.

If you are coming from Heraklion airport/port you will take the national road with direction to RETHYMNO for about 80 kilometers.

When you are close to Rethymno you will exit the national road following a large green sign indicating “SPILI“. You will continue with direction uphill (south) to Spili for about 17 kilometers until you find a right junction WITH A SIGN to “Plakias” and “Preveli“.

You will follow this road to the right and after about 500 meters you will pass through the village of “Koxare“, and 4 km after you will enter the “Kourtaliotis” gorge. The next village, just 500 meters, after the exit of the gorge is “Asomatos“.

Exiting village “Asomatos” you will find a junction where you will turn left (follow the sign to “Plakias”). After 2 kilometers you will find the village of “Lefkogia“.

You will continue for 2,5 more kilometers and you will find a junction to Plakias where you will turn left (there is sign to “Plakias”).

After 700 meters you will be in the center of Plakias where you will turn right after the store FORUM, before the bridge.

After 70 meters you will find Manolis apartments in the right side of this road, where Manolis and his family will be waiting to welcome you.

DISTANCES FROM MANOLIS-APARTMENTS IN PLAKIAS